Xanadu? No, It’s Xala, the Anti-Resort on Mexico’s Pacific Coast 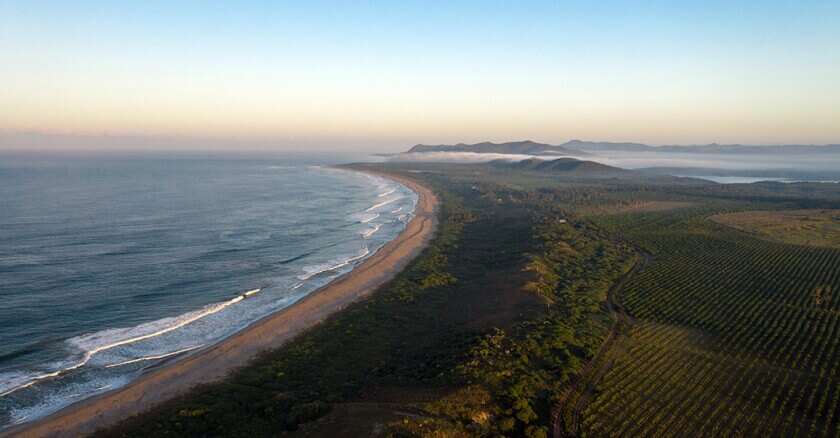 The new 3,000-acre idyll will be socially and environmentally conscious, a town and a travel destination in one.

In the region of Costalegre, Mexico, along a rugged Pacific coastline south of Puerto Vallarta, a place has emerged not unlike the Madrigal family sanctuary in Encanto: a self-sustaining development and community, poised to welcome visitors in 2023. Within 3,000 acres is five miles of undeveloped beach, home to nesting turtles; reforested farm and cattle-ranching land; two estuaries and a mango field; beachside villas and boutique hotels; and—intriguingly—a world-class skate park.

They call it Xala. “Xala is not a resort, it is a living community of people,” said founding partner Ricardo Santa Cruz, a Guadalajara- and California-raised entrepreneur who’s also behind the One&Only Mandarina on Riviera Nayarit with brothers Jeronimo and Juan Bremer. “When travelers come here, it will feel very different to anything they’ve ever experienced before.”

In partnership with some boldface names (Richard Gere and Element Skateboards founder Johnny Schillereff have signed on), Santa Cruz and his Xala cofounders want to create a sustainable community that’s both socially and environmentally conscious. “The importance is placed on accessibility to the local community over the tourist exclusivity often associated with resorts in Mexico and around the world,” they say.

So how does that work? Consider the site’s water supply, which had to come from an aquifer 10 miles away. Xala developers worked with the state government to co-invest and supply water to 230 families and 2,400 acres of land along the way. They’ve also funded the work of Ceci Martinez, who had maintained a small turtle sanctuary on the coast for 20 years until she passed away last year. Her legacy will live on at a new turtle camp and learning center. Meanwhile, a cultural center has already opened, with area students being bused in for after-school activities like art, dance, and music. The town comes first; the three boutique hotels and luxury homes come second.

Now, Santa Cruz is also the gentleman credited with bringing bungee jumping to Mexico in 1994, so it’s not totally surprising that he might find a kindred spirit in Johnny Schillereff. The New Yorker and self-proclaimed “East Coast skate rat” is best known for founding the skateboard company Element, though Schillereff’s latest work is with the Heart Supply, a family affair with his wife Kori and their children that aims to “put a skateboard under kids’ feet” and “allow them to roll toward positive opportunities and a happier, healthier life.”

The same holds true for the “Heart Park,” a beachfront skatepark at Xala—now open—that they hope will become a local hangout and “an inspiring, safe space” for local skaters and anyone who wants to learn. The skate park will provide skateboards, safety equipment, and lessons for beginners. “It’s just a playground for everybody,” says Schillereff. “You can just come here and do whatever you want and have a wonderful time with wonderful people. We want to teach the kids about skateboarding. . . . We want them to do their first ollie, their first push [here].”

The Heart Park will also feature local street art, host events, and curate collaborations with global skateboarders and artists. (U.S. bronze Olympic medalist Jagger Eaton has already stopped by.) Skateboarding has risen in popularity in Mexico City—even warranting a New York Times feature this year—and with its comes an emphasis on diversity and inclusion, across age, race, and gender. Schillereff echoes the power of the sport as a community builder, and core to Xala—a fantasy turned reality that travelers will soon experience as well.