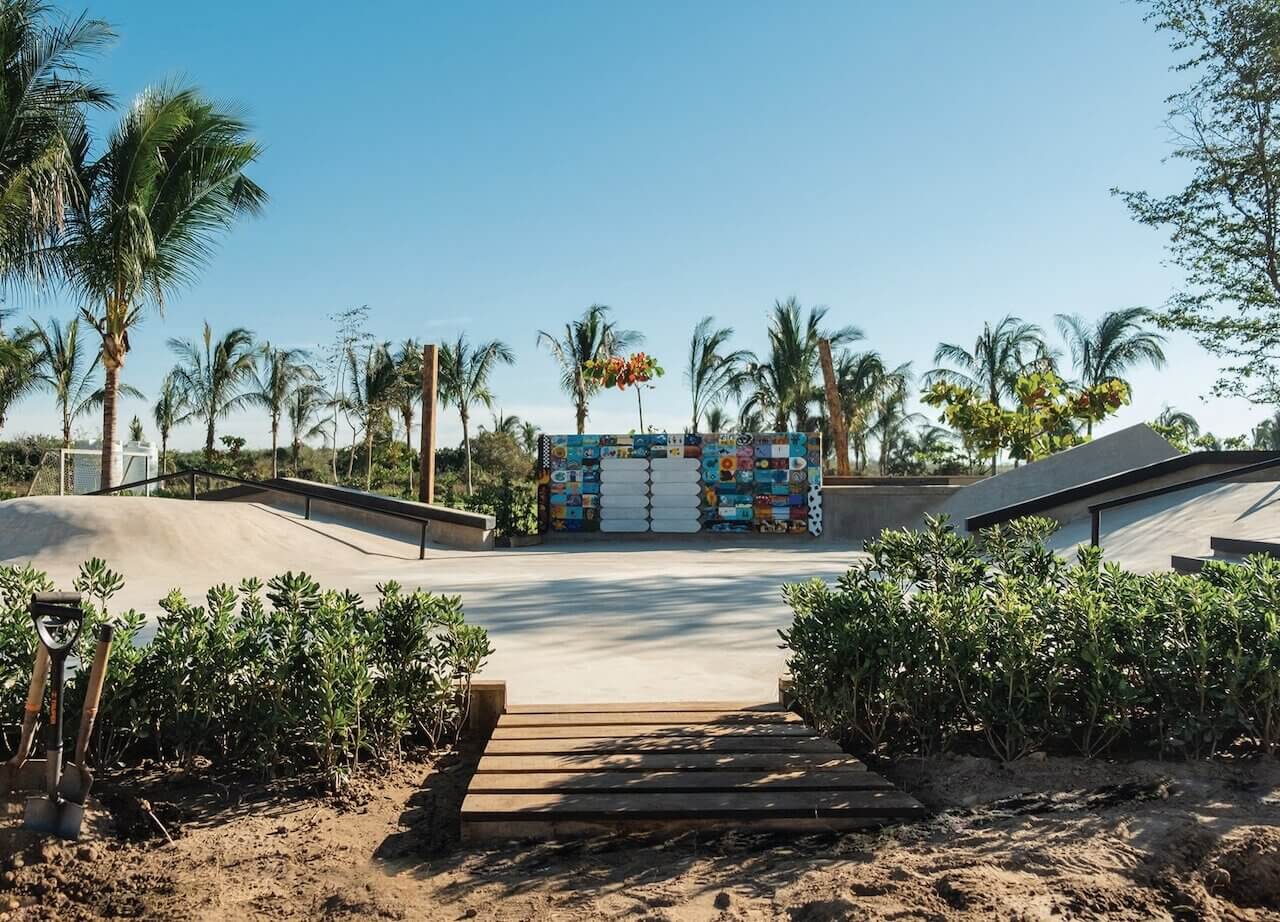 Element Skateboards and The Heart Supply founder Johnny Schillereff partnered with the eco-conscious Xala development to launch a community skate park in Costalegre, Mexico. Welcome to The Heart Park.

Johnny Schillereff received his first skateboard at age 4, in the midst of a turbulent childhood. “To escape the dysfunction, I began to submerge myself in street culture and skateboarding,” says Schillereff, an East Coast native who’s participated in the L.A. skateboarding scene since the ’80s. “Ironically, the path that most people frowned upon and attempted to discourage me from pursuing is the very path that saved my life. Skateboarding gave me the tools—mentally, physically and spiritually—to overcome obstacles, look at the world with an open mind, through a different lens, which led me to evolve beyond a skateboard participant and become an entrepreneur.”

In the early ’90s, Schillereff founded Element Skateboards, a skateboard equipment and apparel brand he sold in 2001 but continued to run as president and CEO for over two decades. Eager to give back to the community, Schillereff—who moved to Santa Monica in the early 2000s—exited the corporate world in 2020 and started The Heart Supply (theheartsupply.com) with his wife, Kori, and children, Lenox and Camp. “It has always been a dream of mine to make skateboarding inclusive, affordable and accessible for future skateboarders,” says Schillereff, who saw a clear need for more role models and inclusive brands that represented skateboarding in a positive light. Thus, The Heart Supply has given away over 2,000 new skateboards to kids in need around the world and expanded distribution into Target to enable introductory skaters to buy authentic equipment. “The freedom, cultural diversity and friendships developed from skateboarding are invaluable,” Schillereff says. “Riding a skateboard is a creative, physical activity that sees no color, inspires equality, and builds self-esteem and awareness. Putting a skateboard under kids’ feet allows them to roll toward positive opportunities and happier, healthier lives.”

The Heart Supply has given over 2,000 skateboards to kids in need

Having had such a positive experience at a family skate camp in New Hampshire as a child, Schillereff aspired to share skateboarding and nature with kids by establishing skate camps in the U.S., Spain, Japan, South Africa, Australia and, now, Mexico. Teaming up with Mexico-based developer Ricardo Santa Cruz—whose socially and environmentally conscious Xala project will also include a learning center, water project, wildlife habitat and more, launching in 2023—the Xala with Heart Foundation opened The Heart Park skate park in Costalegre, Mexico. “When Kori and I, and our children, began to visit Ricardo, we fell in love with Puerto Vallarta, its thriving skate scene and the incredible Xala development: a sanctuary positioned on nearly 3,000 acres and 5 miles of coastline of the Pacific coast, immersed in nature [and] focused on community, agriculture, farming and sustainability,” says Schillereff. “The development will feature a cultural center, a beach club, a soccer field and our skate park for the local community. The local children will have the opportunity to participate in the social and environmental activities that spark their interest while being immersed in skateboarding, arts and nature.”

Children and community members in Costalegre enjoying The Heart Park.

Anointed an Olympic sport in 2020, skateboarding is now more visible than ever—with Los Angeles set to host the 2028 Summer Olympics. “L.A. is home to generations of the world’s most recognized and greatest skateboarders of all time,” says Schillereff, who’s fond of The Berrics skate park in Downtown Los Angeles and L.A.’s renowned skateboarding events like X Games’ Dew Tour and Rob Dyrdek’s Street League. Rallying his community, world-class international skaters including U.S. bronze Olympic medalist Jagger Eaton, Rio Batan and Camp Schill attended the December inauguration for The Heart Park, which Schillereff envisions as an epicenter for like-minded skateboarders and artists from around the world to gather, host events and give back. He notes, “This collaboration will bring the town of Xala and The Heart Supply together to launch a new era of positive social change and make a positive imprint in the world of skateboarding and youth culture forever.”